I am glad to hear that mostly Deaf friends from United Kingdom and Unites States will have a plan for visit my country - Indonesia. That is a main reason why I write about Indonesia.  Indonesia is an archipelagic island in Southeast Asia, lying between the Indian Ocean and the Pacific Ocean. Indonesia comprises five main islands: Sumatra, Java, Borneo (known as "Kalimantan" in Indonesia), Sulawesi, and New Guinea. Indonesia is under the equator with tropical climate. Because of the position, Indonesia has two seasons - wet and dry - with warm tropical temperatures averaging 28°C during the day, throughout the year. In most regions, the dry season spans from May to September, the wet season spans from October to April. 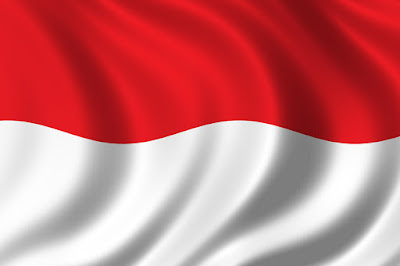 It is actually the usual famous Southeast Asian style of stir-frying cooked rice, but with it’s very own Indonesian spices and mix 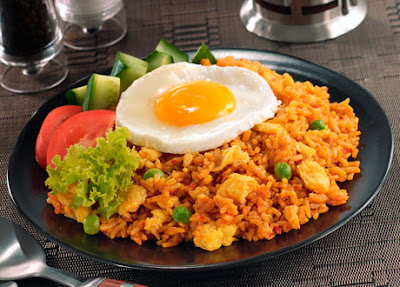 These tasty meat skewers cook up over coals. Whether it is chicken, goat, the scrappy morsels get marinated in turmeric, barbecued and then bathed in a hearty dose of peanut sauce 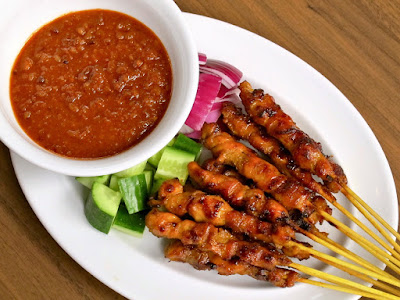 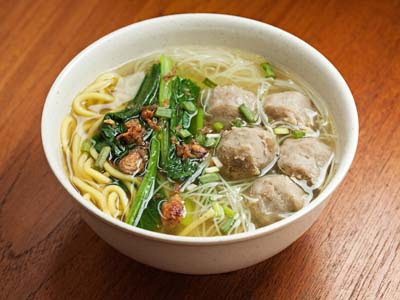 The official national dish of Indonesia is tumpeng, chosen as the dish that binds the diversity of Indonesia's various culinary traditions 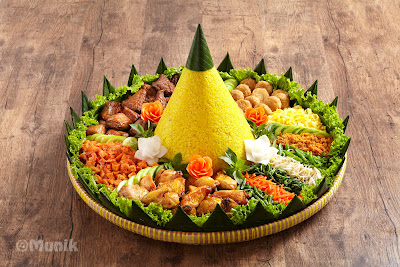 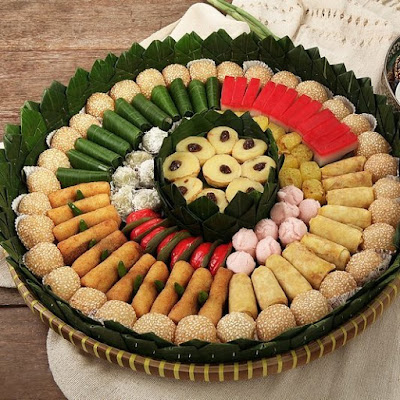 JAKARTA - A CITY THAT NEVER SLEEPS
Jakarta, Indonesias capital city, is a booming metropolis and is the centre of government, commerce and industry. It has an extensive communications network with the rest of the country and the outside world. Over the last several decades, Jakarta has developed into one of Asia leading cities with its skyline covered by modern skyscrapers, state-of-the-art shopping centres and recreation complexes.
Good places to go :
NATIONAL MONUMENT
The main Sudirman-Thamrin avenues in Jakarta lead to the Merdeka Square, where in its center stands the National Monument which houses the first red-and-white flag flown at the Proclamation of Independence on 17 August 1945. Merdeka Square is the center of most important government buildings. The north side is houses the office of the President and the Cabinet. To the South is the office of Indonesia’s Vice President, Jakarta’s Governor and provincial parliament building, as also the American Embassy, while to the West is the National Museum, the Constitutional Court, etc.
CATHEDRAL CHRUCH STANDS RIGHT ACROSS ISTIQLAL MOSQUE
Jakarta's largest mosque - Istiqlal mosque was designed in 1954 by Frederich Silaban, a Christian architect. The first Indonesia president - Soekarno, chose the site for the mosque on purpose, to symbolize the nation’s philosophy of unity in diversity, where all religions could co-exist in peace and harmony. Today, both establishments continue to cooperate with one another, especially to accommodate the parking of cars during religious festivals. The parking lot of the mosque is used by the church congregation during Easter and Christmas midnight mass, and vice versa, during Eid prayers, parking is extended to the Cathedral’s parking lot. 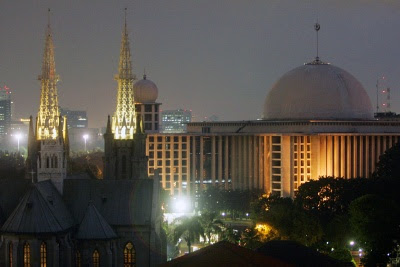 OLD BATAVIA
Built in the 17th century as the Town hall in the Dutch VOC colonial era, the Stadhuis now contains the History of Jakarta Museum, where you can observe artefacts found when Jakarta was still called Sunda Kelapa, also the agreement in stone between the Kingdom of Sunda with the Portuguese. Some original furniture used in the 18th century, and the dungeon where Indonesian freedom fighter Prince Diponegoro was treacherously jailed can also bee seen. Today, the Town Hall now houses the Fatahillah Museum, otherwise known as the History of Museum of Jakarta, while surrounding buildings have been transformed into the Wayang Museum, the Museum of Arts and Ceramics, the Museum of Bank Indonesia, the Bank Mandiri Museum and others. Further down by the Canal are the Archives Museum, and Toko Merah or the Red Shop. Click here Explore Old Batavia

JOGJAKARTA - HEART OF JAVANESE CULTURE
It is the only province in Indonesia that is still governed by a Sultan (provincial rulers) whose kraton (palace) remains the hub of traditional life. Yogya also serves as the base for exploring nearby attractions, including Indonesias most important archaeological sites, Borobudur and Prambanan. Being one of the oldest cities in Indonesia, Yogya has many heritage buildings and monuments. Common sights in the city are local craftsmen practising their traditional arts of printing batik and making silverware and leather goods. Beyond culture Yogya is lively and a shoppers paradise. The main road, Malioboro Street, is always crowded and famous for its nightlife and street food. Many tourist shops and cheap hotels are concentrated along this street, such Sosrowijayan Street.

MERAPI MOUNT LAVA TOUR
A village that was destroyed by the recent Merapi's eruption. It resembled some kind of museum which displayed the things that were over-ran by the destructive lava. You can see potteries that were melted and became out of shape, a set of cattle's skeleton (obviously killed by the eruption) and the photos taken during and after the eruption. The most eye catching display was a clock that was jammed and shown the time of the eruption. Read the experience of Singapore tourist

WATER CASTLE
The Water Castle was built in 1758 by Sultan Hamengku Buwono I. Located in the older part of the Jogjakarta the castle and part of the pleasure garden is now just an intriguing collection of ruins, pools, arches and underground passages enclosed by massive walls. The central courtyard with the nymph-bath has been restored. The most ancient mosques in Yogyakarta with five stairways representing the five pillars of Islam at underground.

EAST JAVA, A TROPICAL PARADISE
Good places to go :
THE BROMO TENGGER - SEMERU NATIONAL PARK
The main attraction in East Java, the national park is named after its two mountains, Mount Semeru (the highest in Java at 3,676m), Mount Bromo (the most popular) and the Tengger people who inhabit the area. Mount Semeru, also known as Mahameru (Great Mountain), is one of Indonesias most active volcanoes, and is often closed due to its highly active nature. The park offers many trekking trails to suit all levels of physical fitness. One of the most popular activities, especially for those who prefer leisure activities, is to stay in one of the simple lodges, then drive up to the top of Mount Penanjakan (2,770m) in a 4 x 4 jeep pre-dawn and wait for a truly spectacular sunrise. Later in the day, a slightly more arduous 90-minute climb up to the rim of the Mount Bromo caldera to view the bubbling active crater is worth the effort. You can also make this ascent on a local pony. 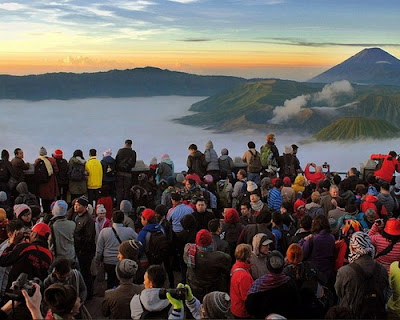 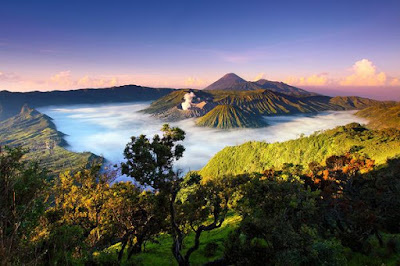 IJEN PLATEAU The plateau, near Banyuwangi and Bondowoso, is an area of spectacular volcanic activity. For the adventurous traveller a visit to the Ijen Crater (Kawah Ijen) is a must as it is one of Indonesias natural wonders. The crater can be approached from Bondowoso in the west or Banyuwangi in the east. This route is recommended as the road is relatively better and the 90-minute foot climb much easier. The colour of the water in the lake is an extraordinary vivid aqua blue. Evidence of volcanic activity is everywhere with steaming water and brilliant yellow crystalline sulphur deposits. 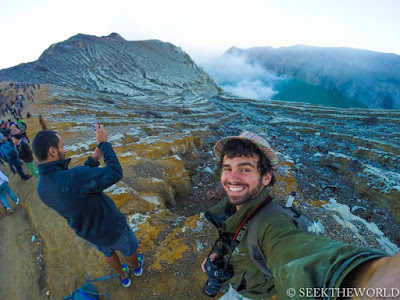 Today, Java is the most developed island in Indonesia, with the major cities of Jakarta,  Bandung (West Java) and Surabaya (East Java) serving as international centres of business, trade and industry.

( SOUTH ) BALI, PLAYGROUND IN THE SUN

I love BALI! Mostly foreign friends agree and say that Bali is the heaven of holiday. South Bali is the most popular part of Bali and is where all the foreign tourists converge and where the action is. The best of Bali is displayed here, from Denpasar urban attractions to Nusa Dua exclusivity and Kuta scenic white sand beaches. Here is where most of the islands action takes place: shopping, relaxing in the sun and the vibrant and, at times, raucous nightlife. There are countless restaurants, bars, nightclubs and hotels of varying standards and budget to suit travelers from all market segments. Click here  Top places to go and best things to do

UBUD (still in Bali), CENTRE OF ARTS & CULTURE
The town is not just about arts and culture as it has numerous other attractions that include ancient temples and ancient sites dating back centuries, most with spiritual significance such as Tirta Empul. Visiting these places will take visitors past the countryside, which is relatively unspoiled by the march of progress taking place in Ubud. Lush rice fields, quaint villages and locals practicing age-old customs and traditions show the other delightful side of Ubud. Check arts galleries out here! 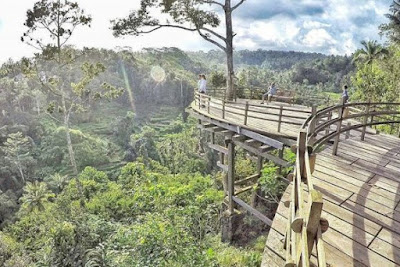 PURA TIRTA EMPUL TEMPLE The Pura Tirta Empul Temple, over 1,000 years old, is one of the holiest temples in Bali. Located about 20 kms northeast of Ubud, it is built around hot springs that still bubble in the central courtyard. The spring water is believed to have curative powers. The Balinese bathe in the water to purify them spiritually and physically during purification ceremonies. 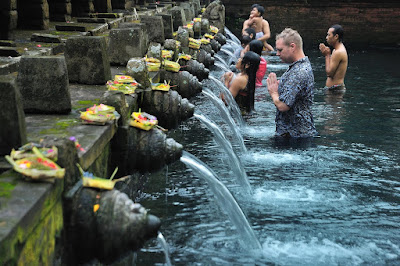 UBUD MONKEY FOREST
A nature reserve and temple complex, which is a popular tourist attraction. It houses about 340 crab-eating macaque monkeys and about 115 different species of trees. Within the forest is the Pura Dalem Agung Padangtegal Temple, a Holy Spring bathing temple and a temple used for cremation ceremonies. 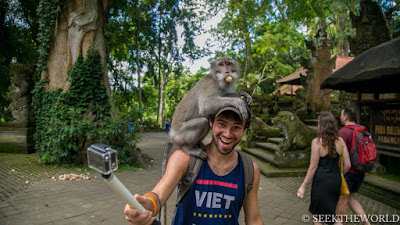 TEGALLALANG VILLAGE
Tegallalang is the place to be to see the stunning picture perfect rice terraces. Round off the tour with lunch in an open space overlooking the luxuriant rice fields.

BALI BIRD PARK
A bird paradise with more than 250 species of birds spread over two hectares of land. The park is well laid out with open walk-in aviaries and free range birds. 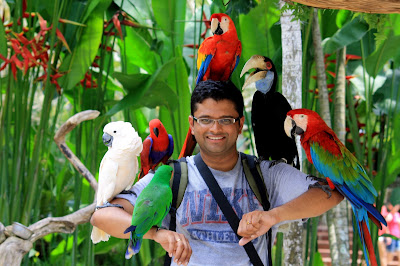 I love the way Calvin Young, an American Deaf traveler who has shared an overview of his adventures in Indonesia. Below is a few of his awesome documentary!

5.  Luwak Coffee - One of the Most Expensive Coffee in the World (Bali)
https://www.youtube.com/watch?v=1tG7XNXzZWI

6. Getting Attacked By Monkeys In the Ubud Monkey Forest (Bali)
https://www.youtube.com/watch?v=ZdV93XGRzGc

7. Jimbaran Fish Market is One of the Top Fish Markets in Indonesia (Bali)
https://www.youtube.com/watch?v=n9sZXOfgH3A

8. Checking Out the World's Largest Lizard on the Komodo Island
https://www.youtube.com/watch?v=0ezf20XEgFo

I have a Balinese friend who works to serve Deaf travelers.  He is Wahyu Cahyadi. He has the official link Bali Deaf Guide. If you meet Deaf communities, you will find more friends, more experiences, get cheaper prices and many more!

My son is three years old and he was born Deaf. I am looking for an ASL teacher for him. Please let me know if you help. Thank you!